So the Barclays Premier League kicked off this weekend and it gave us the usual controversial incidents!

A lot was made of the goalkeeping situation at Chelsea over the summer, and it should be that a Chelsea ‘keeper is the major talking point of the weekends games.

The officials did well to work as a team, as Chelsea’s Courtois was given a red card. The first decision they got right was keeping the flag down as the Blues defence thought Gomis was offside, but he was played onside by Willian. As Gomis then took the ball towards the area, Courtois came running off his line to challenge him. The Frenchman then looked to knock the ball past him but was caught by the ‘keeper. There’s no question it was a foul but the big question was where did it occur. Michael Oliver was a little bit behind the play due to the quickness of the break by Swansea but got himself into the best possible position to see if there was any infringement, his assistant on the far side was in a fantastic position to see the foul happened just inside the area.

The biggest decision Michael Oliver had to make was the colour of the card he was to give to Courtois. He went for red, for denying a goalscoring opportunity. This has split the masses. I think its 50/50 in whether it was right or wrong. Mr Oliver has felt that the two Chelsea defenders that were trying to get back, wouldn’t have done so in time. My personal view is that the speed of the ball and Gomis plus the angle if he’d shot first time meant it wasn’t a clear opportunity to score. If he had taken a touch I believe that Cahill would’ve closed down enough and John Terry would have reached the goal line, so still not an obvious goalscoring opportunity.

If I had been the referee I think I would have done the same as Michael Oliver, as soon as the foul happened he would have looked towards the goal and seen the space behind Chelsea’s ‘keeper and felt red was his only option. I think Michael Oliver had a good game and controlled the game well.

Another decision by a referee that has caused a bit of controversy was the decision by  Simon Hooper to rule out an effort by Jerome, his acrobatic equaliser was ruled out for a high foot. Yes it was high but was it dangerous? Its hard to argue with the reasoning behind the referees decision but II felt that it wasn’t dangerous play and the goal should have stood. If Jerome had his studs showing towards his opponent then I would say that’s dangerous play.

It easy for us watching at home to see all the replays and angles but all that matters is the refs view!

A lot of controversial decisions were made by the men in the middle in the recent round of Premier League games.

At Southampton Vs Swansea there were calls for Fraser Forster to be sent off but the referee, Andre Mariner, got this right as it was more of a coming together. The keepers momentum took him into Sunderland’s Fletcher

In the Manchester City Vs Tottenham game we saw a record equalling four penalties awarded!

The first was awarded to City for a push on Lampard by Lamela. The view referee Jonathan Moss had it looked like a nudge in the back. Lampard was very clever to win the penalty. Having seen all the replays I wouldn’t have given it bit if I had the view of Mr Moss then I would have.

The second City penalty was awarded for a foul on Silva by Kaboul. Not sure how anyone could argue with this decision although it didn’t stop Kaboul protesting his innocence. If you go to ground like the Spurs defender did then you have to take he ball. Very risky to go to ground like that especially in the area!

In amongst all the penalties awarded there was a shout for one which was rightly turned down. Sagna, only being a few yards away from the shot, couldn’t have done much to get out of the way and this was definitely a case of ball to hand.

The next spot kick was awarded to Spurs after Di Michelles had clipped Soldado. Replays show that the contact was outside but to be fair to the referee and the assistant on that side how quickly it happened it would’ve been difficult to know it was outside as it was so clots to the line and Soldado fell a few feet into the area. This was very unfortunate. If the officials had access to video replays it could’ve been correctly awarded as a free kick without any additional delay to the game.

The forth and last penalty of this game involved a red card. As the ball is played across the six yard box Fazio pulls Aguero. Jonathan Moss did very well here as he waited a few seconds before awarding the spot kick because the outcome could’ve been different. If the ball is cleared before it would got to Aguero then Fazio would only receive a yellow card. This has to be the best piece if refereeing I’ve seen this season. 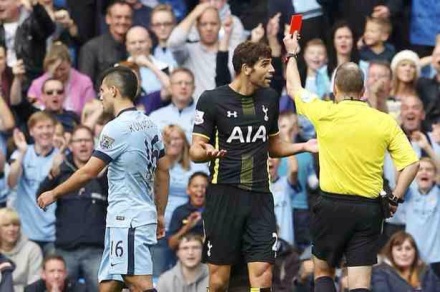 Fazio is told to go for an early shower!

Crystal Palace against Chelsea is a game, despite being a London derby, that you would’ve though would go by without much incident, but there was a few moments of controversy.

John Terry avoided a booking after fouling Frazier Campbell. He slid in to attend win the ball and stop Palace going on the counter attack but Campbell was a little big too quick. The ref was right not to book Terry as the challenge was more careless than reckless.

A few moments later Delaney goes in to tackle Remy, but the Chelsea striker nicked the ball away and the Palace player clattered his opponent. The decision to book Delaney was correct as I would say the challenge was reckless.

Azpilicueta received his marching orders after he slid in to a challenge with Palace’s Jedinak with his studs high. This was clearly a challenge with excessive force and the referee was correct in issuing a straight red.

Delaney then received a second yellow card, this time for pulling back Remy. Although Remy’s fall seemed a little theatrical the pull was obvious to the ref and a yellow card was correctly shown. After the game the Crystal Palace manager said that the referee was influenced by the Chelsea. I would hope not and will assume that he game himself a few moments after awarding the free kick to decide if further action was needed.

The last game I will look at from last weekend is Stoke Vs Swansea. There was two penalties in this game, one for each side. Both sides felt that the others shouldn’t have been awarded.

The first is for a foul at a corner by Stoke City’s Ryan Shawcross. He was spoken to by the referee before the corner was taken about keeping his arms to himself. The referee takes up a great position and as the corner comes in he clearly sees Shawcross throw Swansea’s Bony to the ground. Does this happen at every set piece that comes into the box? Yes. Are penalties always given? No. Should penalties be given all the time? Well that depends on the referees view and of or was as blatant as this incident. Most of the time both players are pulling each other so it can be difficult to judge who’s at fault! The next was for a foul on Moses by Rangel. The referee was conned here as the replays show that the contact was minimal and not enough to send Moses to the ground the way he did. But the referee doesn’t have those replays. Rangel did put an arm out and at normal speed with the way the Stoke man fell it would’ve looked like a penalty to the referee.

After all that has happened last weekend take a second to think about the views you have access to before saying how poor the referee us and remember the refs view!!